And I restart my posting with a rant about living on the edge of nothingness. Don't get me wrong, I like rural areas, and small towns, but living in the countryside with nothing to do doesn't jive with me at this time in my life. I've begun to wish (even though I know it would've never happened) that instead of moving from the suburbs to the countryside (like I dreamed of when I was a kid), that my parents had moved us to the city, however much real urbanity there is in Austin.

After being at school for a year in Eugene, Oregon, I hate being isolated in this house even more. Being 9 miles away from the closest town is no longer a source of pride, but of agony. Especially when our property lacks any real exciting features; no hidden canyons, or high hills. I wish it was only a mile to a bookstore, or even a bakery. Having to get into the car and drive to do anything at all; I'd rather face total sensory overload than having to deal with trying to make up stuff to do.

It's also a lot harder to keep in shape; when living in Eugene, I could just ride my bike around town, exploring, or going shopping; here, the only roads are two-lane highways with 60 mph speed limits, which I'm a bit wary of biking on.

Decided to update the blog; been a bit of a long hiatus recently due to moving to Eugene, Oregon to attend the University of Oregon and major in Architecture, with architecture studio being a lot of the reason for having so little time to blog. Spending multiple all-nighters working on models is not a conducive environment to write in.

So for most of the year, I'll be changing my focus from Austin to Eugene, concentrating on the city's evolving urbanism and the role that the University plays within the city, as well as the community's conflict between varying ideals of "green-ness". What I like so much about Eugene is that even at only around 150,000 people, it still has a better existing urban fabric than Austin does. Especially infrastructure-wise. Mainly from the fact that it's been a substantial-sized city for longer. Downtown has wide sidewalks with at least 20 blocks of 2-3 story mid-rise buildings. And several of the surrounding city neighborhoods were obviously built pre-zoning, with their nice mix of apartments, offices, single-family homes, and offices. For the size, it also has a great transit network, with BRT, and several other lines that run every 10 minutes during the main part of the day, as well as a circulator linking campus and downtown, and nice rural routes that connect the city with parks and small towns.

There are some drawbacks, though, sometimes Downtown can seem a bit dead: so many offices and city buildings, and not enough entertainment or working public spaces, and some of the big avenues like 11th and 6th and 7th seem to break up downtown into spaces that don't interact with each other because they're just large car sewers. Also, especially the Police, and sometimes the University as well, don't seem to appreciate the urban parts of the city for the gem they are, and can get quite high-handed.

I'll be trying to update more frequently with posts about some of the urban developments, transit changes and architecture studios that are happening around town recently.
Posted by Matthew at 2/18/2010 05:51:00 AM No comments:

Looks like Austin might be just a little bit closer to voting on the City's urban rail project, which unlike MetroRail, will actually garner ridership, as it connects three of the main employment centers in Austin: UT, the Capitol, and Downtown, with some of the northern inner-city neighborhoods. And that's just in the first phase. If it ever gets completed, the urban rail project could encourage more and better development in the actual livable center of Austin, making its claims to being "green" more legitimate, and fostering more of a sense of place in central Austin. And the fact that they're looking at alternatives to the horrible routing along San Jacinto near UT and the Capitol seems to be a good sign.
Posted by Matthew at 10/07/2009 01:49:00 AM No comments:

Just a drawing-out of the proposed Austin Urban Rail System, a streetcar/LRT hybrid that the City is thinking about since CapMetro went through with the MetroRail boondoggle. Map by The Transport Politic
Portland, that transit Valhalla, opens its newest light rail line today, the Green Line, which connects northern Clackamas County to downtown Portland, and adds a new North-South Transit Mall (with a re-routed , to compliment and alleviate traffic off of the original East-West Transit Mall. It's been in the works for near 35 years now, as the Portland Tribune writes in this article:

"The Interstate 205 MAX line – the latest addition to the Portland region’s ever-expanding light-rail system – sometimes appeared to be the project that would never happen."

It's almost like Austin's current MetroRail boondoggle, but instead of years of planning and rejection ending up in a unusable mish-mash of light and commuter rail, Portland went on with other projects, including the Red Line to the PDX Airport, and the Yellow Line up Interstate Ave., not to mention their superb streetcar endeavor.

But it is similar in that a suburban minority held back the project for everyone that could benefit from it; in this case, it was state and regional voters, including those in Vancouver, WA that rejected TriMet's requests for money, not suburban voters totally rejecting any idea of rail as in Austin.

"State and regional voters rejected funding for a line from Vancouver to the Clackamas Town Center through Portland and Milwaukie in the 1990s, forcing TriMet to find other sources of money"

So they succeeded by instead only building the section to Clackamas County, not the northern section into Washington (though that is eventually planned to be built). This, along with the recent Seattle Link LRT opening just go to show how behind in the game Austin is as far as transit. Everyone knows, CapMetro works nothing like TriMet, which of course has its flaws, but at least is competent, and with the assistance of the Metro government, has produced some truly inspirational transit projects. CapMetro has done nothing of the sort, which is why the City of Austin's separate urban rail project needs to be pushed through and worked out succesfully, so that Austin can have real rail transit like Portland.
Posted by Matthew at 9/12/2009 01:48:00 AM No comments:

Found this while hunting through the web of transit-agency pages for the Austin area, CARTS, the rural transit provide, who also provides commuter service and city bus services to San Marcos and Buda, has this idea for improving it's rural bus routes.

Really interesting idea to make it nicer and safer to ride their rural routes. One could dream of eventually a system of rural routes connecting small towns to each other and to Austin, with these as their stops. Like I said...dream...

Left for Guadalupe Mountains this morning, I'll try to autopost articles over the next few days, until I get back on Tuesday.

Anyways, a couple weeks ago I went on a bus odyssey, as I like to call them, with a friend; plans were to take the 983 express from Lakeline P&R in NW Austin downtown, and then transfer to the 1L/1M, which goes across the river, and get off on South Congress and wander around. But that didn't happen. We botched meeting up; she got on the northbound right as I arrived, and so had to get off at an unplanned stop, and we missed the southbound.


View Trip to SoCo in a larger map

Still determined to take the bus, we drove down to Pavilion P&R to catch the 983 southbound there. It wasn't there yet when we arrived. So we hopped on the 392 eastbound to take all the way to N. Lamar, and there hop onto the 1L southbound all the way to South Congress. Which we did. And it took more than an hour just on the 1L, since it's an all-stops workhorse route, one of the reasons I love riding it. You can do some awesome people-watching on that bus. People from all walks of life ride it: homeless people, day-laborers, wage-earners, businesspeople working downtown, college students, teens... 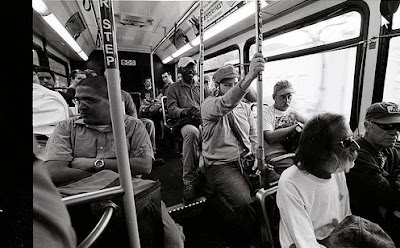 We got off near Guero's Taco Bar, which is more or less the northern end of what's truly the little Main Street that is South Congress. The storefronts look more like they belong in some small town in the Hill Country than a state capital. That is except for the crazy paint-jobs and signs. There's places like Uncommon Objects, a sort've hipster version of a thrift store/flea market with awesome vintage stuff (it really spans all definitions of "stuff", too!), Tesoro's Trading Co., a market-like store that sells goods from all over the world, mainly Latin America, Africa and Asia, and cool, hole-in-the wall record stores that only sell vinyl: Friends of Sound (all of which we went to, ate at Homeslice Pizza, across from Guero's). There's something to whet almost anyone's whistle! It's an amazing place, right next to the lucky kids at St. Ed's too. Didn't do much other than scratch the surface. We had to wait forever to board the 1L north at the south end of the strip, especially since we had chosen to try and board at a stop that the limited-stop 101 skipped. We took that up to West Campus (of UT), where my friend got off to meet family, and I boarded (wrongly) the 987 express north, wrong because it skipped Pavilion P&R on it's way north, where I had parked. So then I had to get off at Northwest P&R, and wait for the southbound 383; 30 minutes of doing nothing, as there's nothing around the P&R. Then another 30 minutes of wandering around the suburbs in a bus before we made it back to Pavilion. I was so tired, and glad to see my car.
Posted by Matthew at 8/28/2009 10:00:00 AM No comments: